The stigma associated with being the offspring of a celebrity can begin even before birth. These 5 recent celebrity baby showers are perfect examples and would make even Ivanka Trump cringe.

Becoming a parent for the first time is an exciting prospect for any young couple. When the parents in question are wealthy superstars with lots of money to burn on a baby shower, however, things can get especially interesting. From the location, to the guest list, to the gift bags - festive soirees of the rich and famous are only limited by Mom and Dad's imaginations. Enjoy these star-studded statistics from five recent celebrity baby showers and draw some A-list inspiration for your own special event.

Tori entertained her 50 baby shower guests at the trendy Elixir Tonic & Tea in West Hollywood, California. Since the expectant mother and her new husband, actor Dean McDermott, already knew their baby was going to be a little boy, decorations for the shower featured a predominantly blue theme. Blue lanterns and hundreds of votive candles were placed throughout the eatery, while beautiful turquoise vases were filled with white amaryllis.

No expense was spared on the cuisine and diners were presented with blue Etch-a-Sketch trays piled high with comfort foods like grilled cheese sandwiches, tuna melts, miniature corn dogs and pigs in a blanket. Dessert picked back up on the blue color scheme and included indigo cake icing and tasty blueberry popsicles.

Diddy and his long-time girlfriend, Kim Porter, threw a lavish baby shower in downtown New York City shortly after announcing they were expecting twins in October 2006. The event was christened "Little Miss Diddys' Pretty in Pink Baby Shower", and hungry guests who could remember the long title were treated to the ultimate in hip hop extravagance. The celebrity-filled crowd feasted on shrimp, pink cocktails, specially made pink M&Ms and even Perrier Jouet champagne in pink floral bottles.

The most memorable aspect of the shower were the gifts bestowed on the yet-unnamed Little Diddy's by some of Daddy's big pimpin' pals. Denzel Washington showed up with a pricey pink-and-white chandelier from Ga Ga Designs. Jay-Z and Beyonce Knowles bestowed a custom-made changing table upon the couple and LL Cool J came strapped with two designer cream-colored cribs.

Tobey's Spidey-Senses must have certainly been tingling as his fiancie, Jennifer Meyer, threw a costly and classy baby shower for a group of their celebrity friends in October, 2006. A-list attendees included Courtney Cox-Arquette, Jennifer Garner, Kate Hudson, Demi Moore and Jennifer Aniston - who must have been relieved to finally hear about a new baby that doesn't belong to Brad.

The lucky ladies passed the time sipping fresh lemonade and nibbling on hors d'oeuvres like sesame shrimp and chicken skewers before sitting down to a catered buffet lunch. After dessert Jennifer received a variety of gifts from the hot L.A. baby boutique, Petit Tresor - where, incidentally, all of the celebrities on this list were registered. Jennifer's Dad is Ron Meyer, the head of Universal Studios, and the family home provided the perfect location. The not-so-humble homestead overlooks the Pacific Ocean and includes a lovely lawn and supersized swimming pool.

Meyer and Maguire became engaged in April, when he got down on one knee and offered her a dazzling Tiffany diamond ring. The proposal was almost as adorable as their matching last names. The couple has yet to set a date for the nuptials, and the baby is due in July 2007.

One of basketball's royal couples, Shaunie and Shaq O'Neal had their latest baby shower in March, 2006 which hosted a whopping 150 guests. The couple is no stranger to parenthood, but treats each new addition to the family like it was the first. The couple have three children together and one each from previous relationships.

The shower featured some of the most imaginative activities on this list. Guests enjoyed everything from manicures, to pedicures, to massages - and even knitting lessons! Although traditionally for the mother and her friends, professional party-planner, Mindy Weiss, made sure there were plenty of distractions for the men on hand. Perhaps in a literal 'good luck' sentiment, tables were set up for Shaq's pals to play blackjack, craps and poker.

Guests like Star Jones and Shaq's teammates from the Miami Heat received trendy Wendy Bellisimo diaper bags to take home to their own families. Wed in 2002, the couple held the shower at their enormous Miami Beach mansion and say that baby Me'arah Sanaa, born on May 1st 2006, will be their "buzzer-beater".

Music industry couples don't come any more glamorous than rockers Gwen and Gavin who brought Kingston James McGregor Rossdale into the world in May, 2006. Their baby shower was held at a friend's mansion in Los Angeles and featured a pink lamb theme to match Gwen's L.A.M.B. clothing line.

Celebrity guests included Christina Applegate and David Arquette and all of the attendees were given truffles and flowers to take home as gifts. No one, however, made out as well as the guest of honor. Gavin and Gwen's unborn baby was given a $1,200 bedding set, a $1,300 chandelier and a $6,200 gold necklace, among many other presents. Estimates put the final cost of the event at roughly $35,000 dollars.

Motherhood must be treating Stefani well, as her band No Doubt is set to return to the studio this fall to record their first album in over 6 years. Whether or not the new track list includes any ska-flavored lullabies remains to be seen.

This article was brought to you by Beau-Coup.com - a leading provider of baby shower and wedding favors founded on the notion that brides and expectant mothers are looking for something truly exceptional.
ID: 127 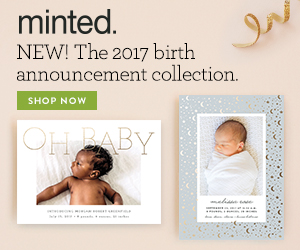